In a 7-3 Vote The Capital of Kansas -Topeka has sent a loud and Clear message-- Its ok to beat your spouse, we have decriminalized it.
From: The Topeka Capitol Journal
City repeals ordinance banning domestic battery
Yes, it is now legal within the City Limits, imagine in the Month of October, the 24th National Domestic Violence Awareness Month-- Topeka Legalizes Domestic Violence. All Survivors and Victims every where have been thrown back into the dark ages. Shame on Topeka for their 'slap in the face' to every victim nationwide. Topeka Kansas is now-- the abuser.
This will set a bad precedence through the nation. One that will have deadly ripple effects. Myself and other advocates and the three Councilpersons who voted against repealing and legalizing Domestic Violence engaged in a tense hour and half with dialogue with the rest of the Council and especially Dan Stanley Interim City Manger.
I tip my hat to these three Council members who were 'bullied' by the rest of the council's self serving needs on the 'backs of Domestic Violence Victims
Those who opposed in the final vote were: (please lend to them your support and thanks)


The City Council members who sold out Victims of Violence: (and need to be voted out)
Dan Stanley- Interim City Manager
Mayor Bill Bunton

The Councils email address and contact numbers are here: http://www.topeka.org/cityofficials/

I witnessed the Council that supported the the 'Decriminalization of Domestic Violence with in the City Limits of Topeka - berate speakers, who were survivors and victims, with their temper tantrum and finger pointing.  No one in the City wanted this to pass except Dan Stanley and his "six" along with the Mayor as the majority vote. I simply am appalled as is the rest of the Nation who watched it live streaming.

In the following days there will be more National Media, Talk Shows as the the 'First City in the Nation,' The Capitol City of Kansas, Topeka has just repealed the City Ordinance 'Decriminalizing Domestic Violence' 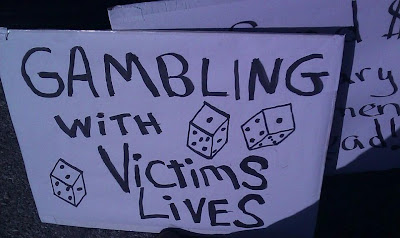 October 10th, 2011
City Hall
Re: Repeal of Domestic Battery
Comments by Claudine Dombrowski
Council members,
Roll the dice!!! Maybe if you repeal and decriminalize Domestic Violence there may be charges filed by the DA
Roll the Dice!  Maybe not as he still does not have the funding to prosecute.
This is what the City Council, the County Commissioners and the DA are doing! Gambling with the safety and lives of women. This is UNACCPTABLE!
These Laws were NOT written with the ink of pens but with the blood of those who have died. They are not to be gambled or toyed with.
If you do not think ‘messages’ are important like the message you send with repealing the ban on dv—think again. That message alone will break the spirits of all hope, all validation of all victims/survivors—by further demeaning, degrading and devaluing once again the horror victims must endure.
According to data from the Governor’s Domestic Violence Fatality Review Board, more than 20 women are killed each year in Kansas as a result of domestic violence. Nationally, domestic violence is one of the leading causes of injury to women. Data from the U.S. Department of Justice says that on average, three women are killed by their current or former partners each day.
There are several options with even more yet available, Take the deal Taylor offered you and get rid of municipal court, or have the commission reinstate the budget cut, to the DA, or cut 350k from the public library. Or 250K for another roundabout, or another 200k for golf course irrigation, dead women have no use for libraries, golf course or roundabouts.
Roll the dice! Game over -  Victims loose.
What a way to honor victims and survivors in the 24th year of National Domestic Violence Awareness Month.
Posted by Unknown at 10/11/2011 08:50:00 PM